More Stonefields blocks.  These blocks are taken directly from the stonefields pattern.  That is not a really honeybee on the middle block.  I thought the flower looked kind of spare so I added the honeybee as a broderie perse.

When I first completed this block, I used just yellow pieces but the block ended up looking kind of boring so I swapped half the yellow blocks for the same pattern in pink.  The hexies end up with the same architectural look but with variation.  I also added the border to help cheer it up.

Does anyone have any advice on how to sew hexies together without the thread wrapping around the other hexies until you want to pull your hair out?  No matter how I sew it, the thread wraps around another hexie so I have to stop, unwrap and curse.  I use 100 wt invisifil for applique so I am also dealing with very fine thread.  Help. Please! 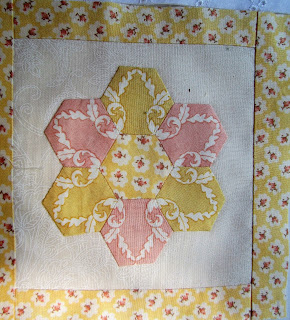 I find that when I am creating a quilt choosing my own fabric mood and style that rather than a kit or set of fabrics determined by someone else that  I spend quite a bit of time auditioning different fabrics and sometimes will change them out even after I have completed the block as I did with the hexie above. Another instance is my house block: 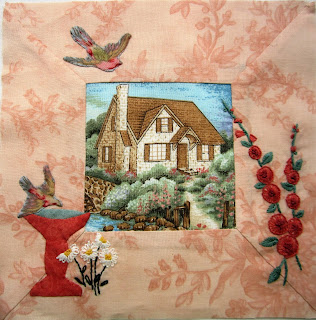 On this block, I wish I had used a different color for the birdbath.  I may change it but that involves lifting the carefully stitched wing of the bird and having to re-embroider the daisy.  Not impossible but, once finished, it is hard to re-do something.  My reason for using that shade of brick red is because the blue of the sky is off from the aquas I am using and I thought the brick red would tie the block more into the general color mood.

Talk about a slow Sunday!  Here is my cat Yoshi zzzz-ing out in the backyard while overseen by a curious blue jay. 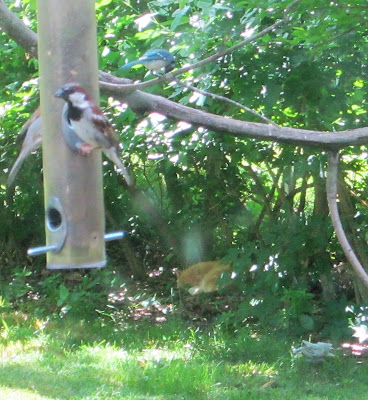 I don't talk much about Yoshi as he is an outdoor cat-really a backyard cat because he never leaves the yard.  He was an indoor cat but he bites.  I put up with it for a while feeling that I just needed to learn his signals.  But when he bit my check just below the eye, it was time for a change!  If you follow the blog "Fabric Therapy" you will know that Teresa's beloved cat Mr. Weasley bit her hand which became terribly infected and required an operation.  She could not use her hand for about 2 months and then underwent P.T. for a while.  A death knell for an appliquer!

So out he went.  I built a door flap into the garage so he could come and go.  He has a nice insulated house in the garage with a heated pad for winter so he does all right.  He is really a sweet, loving kitty.  Maybe he bites because he is declawed - NOT BY US.  Yoshi was a shelter cat my daughter adopted when at university.  He is rather happy being an outdoor cat-he chases the birds and squirrels and finds lots of nice places to sleep.  He has a couple cat friends he fights with now and then and a big stump which is his throne.

Post Script on Monday:
I linked up with Gwennie Inspired Medallion Linky .
This blog had the prettiest baskets so I decided to add my Caswell basket to the link. 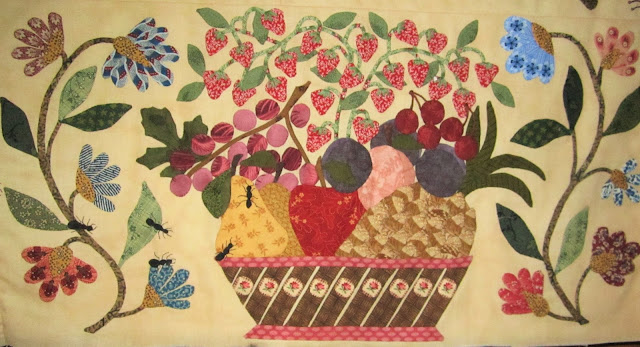 This quilt flimsy was finished shortly before I started to blog and is actually one of the reasons I wanted to blog.  I love this quilt pattern by Threadbear.  I have made lots of changes to it but it remains their quilt pattern.  Since I missed blogging about my WIP ups and downs I thought I would enter a block on each post so I could demonstrate the quilt.  So here is block one, the biggest block at 11x22.

I love fabric with all its beautiful colors, textures, moods and motifs. I love to take bits of beautiful fabric, stitch it together in patterns that please me and is one which I hope evokes a story. My finished quilts and wall hangings are shown below.

You can reach me at pmarbourg at yahoo dot com

TO SEE DETAILS
OF QUILTS, CLICK
TABS UNDER HEADER 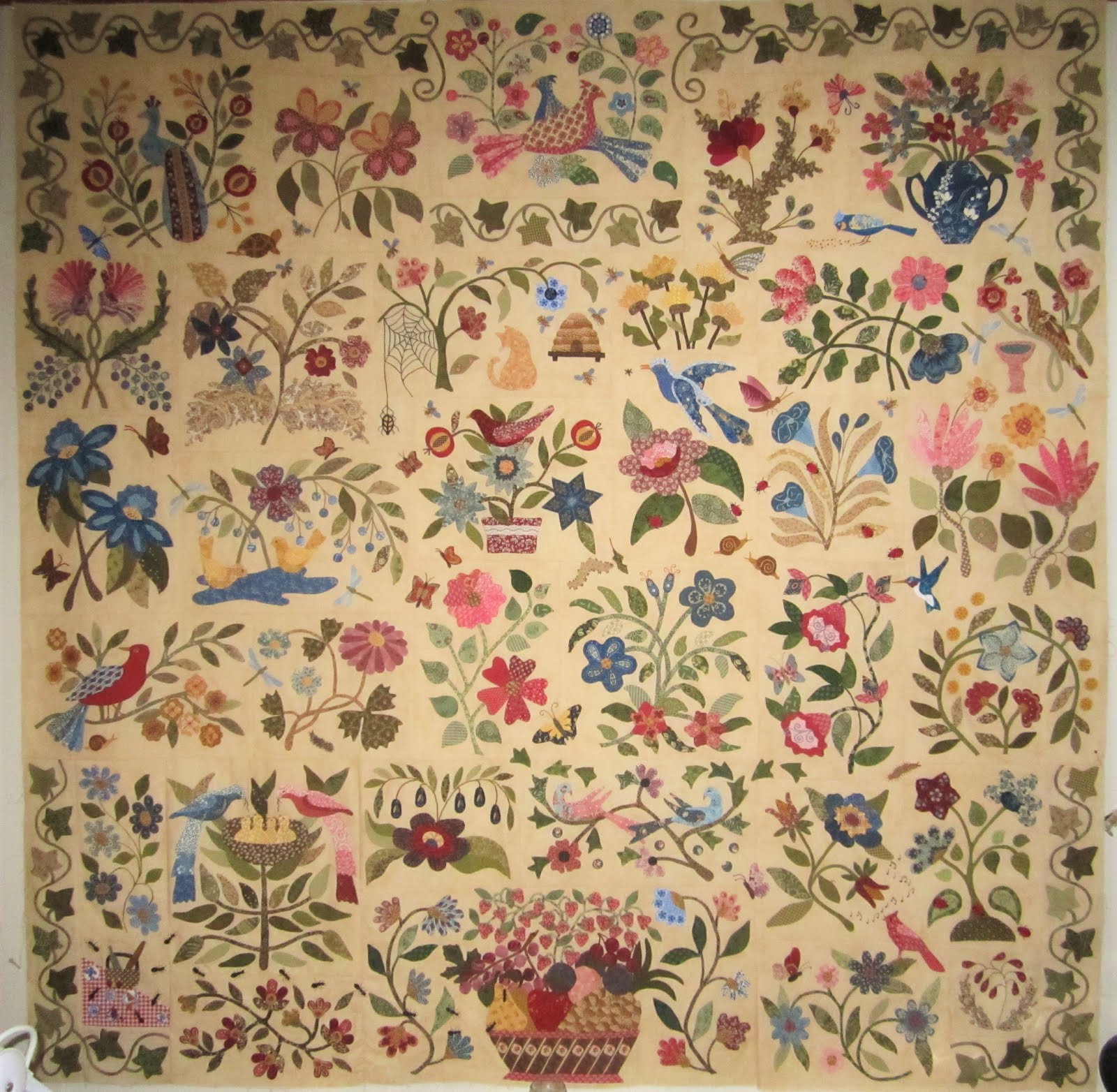 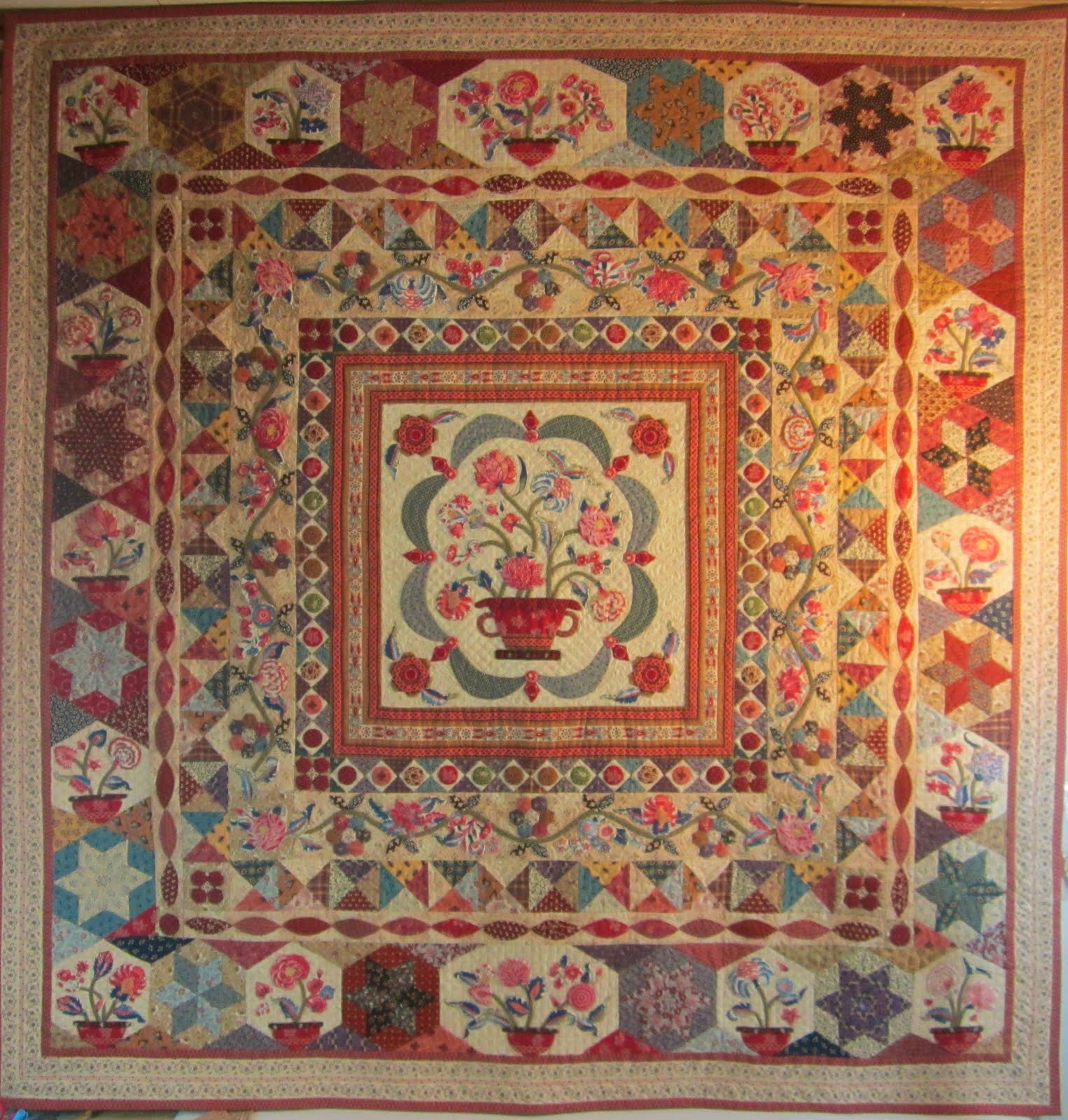 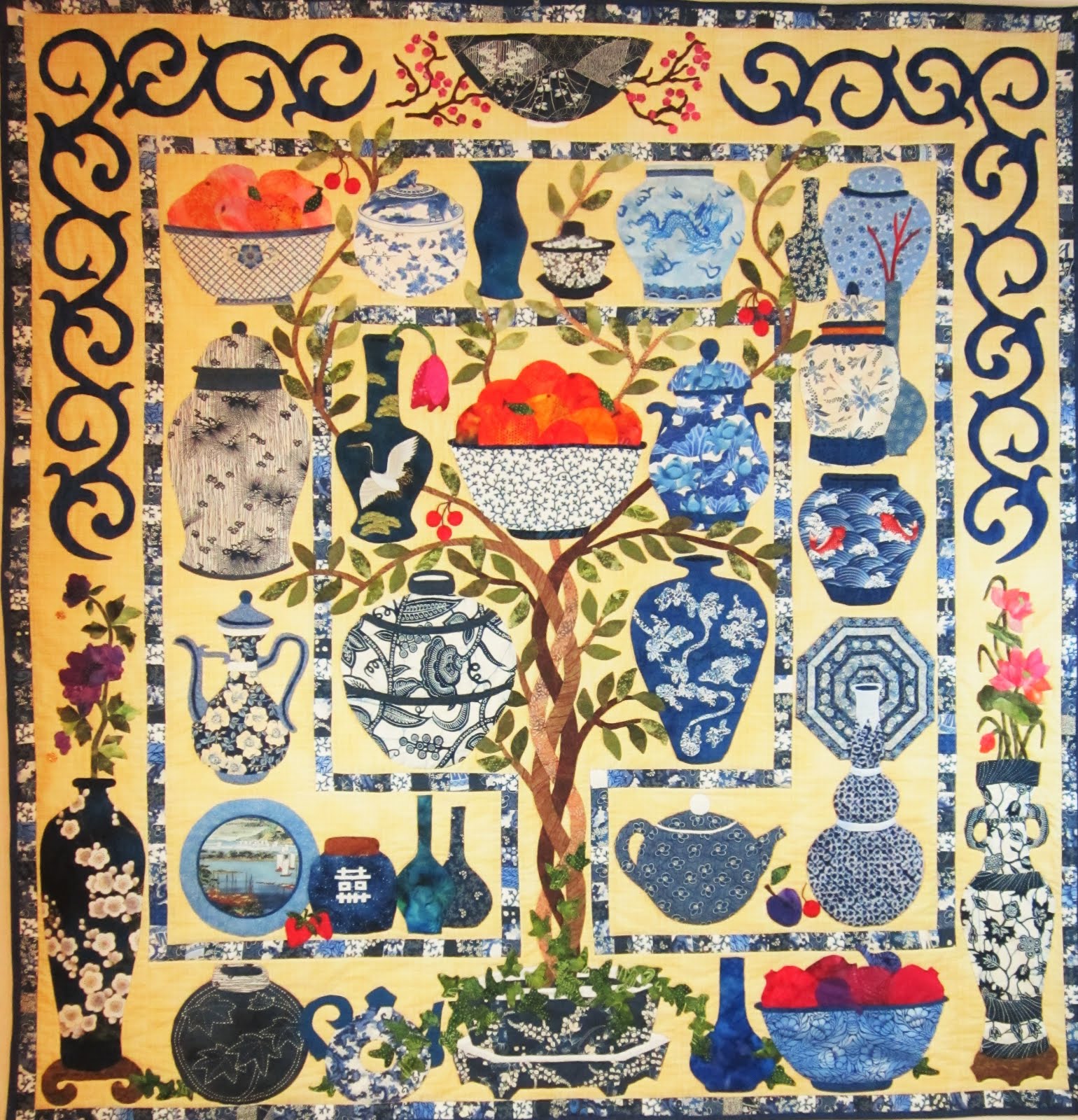 A SEASON IN TIME